Remote Networking in SpecView allows another computer to see the data from the SpecView PC in real time.

Unlike remote control packages such as PCAnwhere, SpecView’s Remote Networking allows multiple remote stations simultaneously with no interference of screen or mouse actions between stations and is significantly faster in operation.

Scroll down for overview and examples, or see here for more details 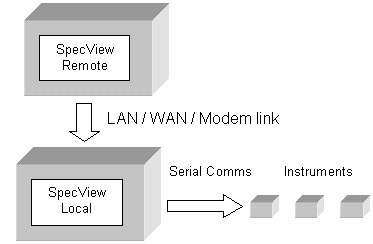 SpecView Local is the computer that has the connections to the instruments and also has the ‘dongle’ attached.  Remote User licenses are stored in this ‘dongle’.  There is no ‘dongle’ on the Remote computer(s).

Install SpecView on as many Remote computers as you like.

The Local PC will allow as many simultaneous Remote users to connect as has been authorized in the ‘dongle’.

On the Local, identify the Remote users, their access level and passwords.

Take your SpecView CD and install SpecView on the Remote computers.

Any of the Remote computers can connect to the local but only one at a time will be allowed.

If you wish to have 2 of the above users connected simultaneously, purchase two Remote User licenses (order code /R2/).

You have the Local computer connected to a large machine. You want one Remote computer for use as a 2nd operator panel on the machine, and be able to monitor the machine from Remote locations as in Example 1.  Since the 2nd operator panel will be continuously connected, you need to purchase at least two Remote User licenses (order code /R2/).

For more details, see here or for in-depth details about how to setup Remote networking, see the Online-help in SpecView  or the manual.

Home   What To Buy   Remote